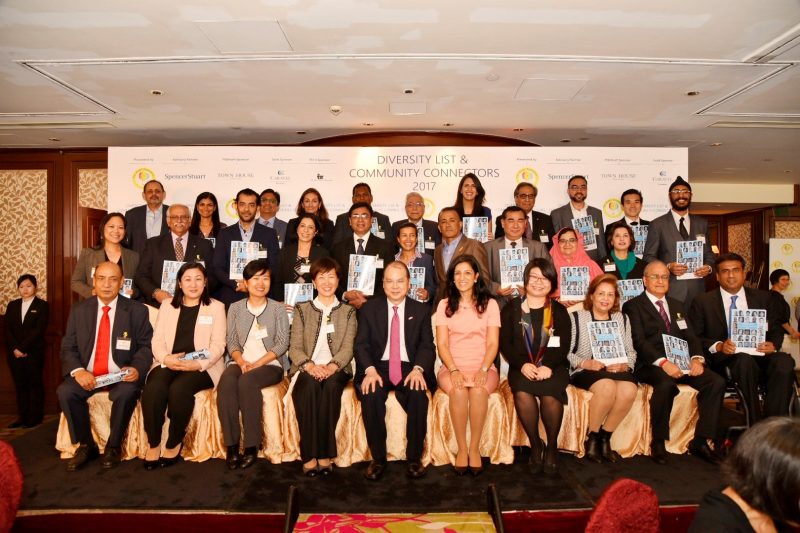 5 out of 16 Diversity List 2016 candidates have been appointed to the advisory bodies.

Hong Kong, SAR, April 5, 2017 /Xinwengao.com/ - The Zubin Foundation today launched Diversity List & Community Connectors 2017. Building on the success of Diversity List 2016 (5 out of 16 candidates has been appointed to government advisory committees), Diversity List 2017 profiles 22 individuals across various professions who have been through a screening process with Spencer Stuart, a leading recruitment firm and partner on the project.

“Since 21 March 2016, 5 new appointments have been given to the 16 candidates. I applaud the HKSAR government – this is a tremendous milestone for ethnic minorities. The population of ethnic minorities is young in age and is an important talent pool at a time when Hong Kong has a rapidly ageing population. This population brings local knowledge, self-defines with a Hong Kong identity and is committed to staying in Hong Kong. This population should be included in advisory committees of our government – but also on NGO boards of those organisations that address ethnic minority issues.”, said Shalini Mahtani, Founder of The Zubin Foundation.

The 22 individuals named today as part of Diversity List 2017 and the 5 Community Connectors come from a wide range of professional and personal backgrounds. Alice Au, Board Director of Spencer Stuart, partner on this project said, “Along with the base criteria we also evaluated the candidates based on attributes we use for board candidates. This is a group of hardworking, talented, dedicated and passionate people many of whom have endured adversity as minorities but persevered, who have gone on to make significant contributions to their professions and communities. This is a group of people who are role models, not only for ethnic minorities groups but also for the general population in Hong Kong.”

Mr. Matthew Cheung, Chief Secretary of Administration of the Hong Kong SAR Government was the official guest to commemorate the Launch of the Diversity List & Community Connectors 2017 and deliver the opening remarks. “Hong Kong is home to a diverse and multi-racial community with more than 200 000 ethnic minority people choosing to settle here. I truly appreciate that many ethnic minorities, having been here for generations, play important roles in shaping the city’s history. And many indeed contribute to making our home a better place to live in. We embrace the value of racial equality that makes us an inclusive and strong society. We appreciate the good work of think tanks like The Zubin Foundation, which have conducted numerous research studies on ethnic minorities in Hong Kong and put forward constructive recommendations for policy makers and private organisations alike. The Government will continue to develop Hong Kong into a socially inclusive society.” said Mr. Matthew Cheung.

Diversity List & Community Connectors 2017 was launched on the International Day for the Elimination of Racial Discrimination with over 150 attendees from the Indian, Pakistani, Filipino, Thai, Nepalese, Bangladeshi communities, etc.

Definition
Diversity List Individuals who have the skills to sit on any board (government, NGO or corporate). They are seasoned leaders in their fields of work and would be an asset to any committee.

Community Connectors Individuals who have significant experience in directly working with ethnic minorities to address specific questions about employment, education, health, welfare and other issues. They would be an asset to NGOs or specific government committees that work directly with ethnic minority service users.

Link to the Race for Opportunity: Diversity List 2016: http://www.zubinfoundation.org/images/RfODL_final_small.pdf