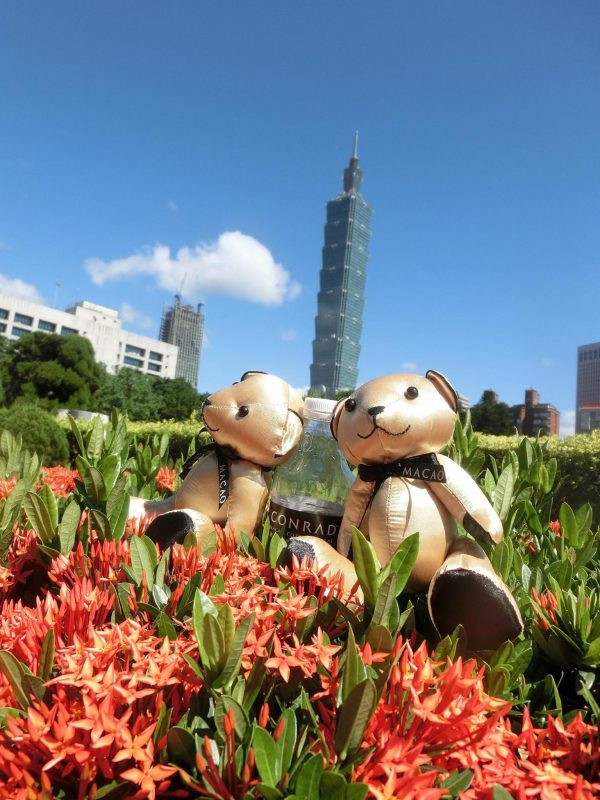 Macao, China, August 31, 2016 /Xinwengao.com/ - A Facebook fan of Conrad Macao, Cotai Central, Chris Choi from Macao, won a two-night stay in the hotel’s Presidential Suite including breakfast valued at MOP65,000 after uploading a photo of a Conrad Macao Bear to his Facebook page using the hashtag #Travelbear2016. The winning photo was taken against the backdrop of Taipei’s famous 101 Building.

Conrad Macao, Cotai Central gave fans the chance to win a #TravelBear2016 getaway package during July and August if they uploaded a photo of one of the hotel’s signature bears, taken at a global landmark, to their Facebook timeline. Photos needed to include the hashtag #TravelBear2016 and also tag Conrad Macao Facebook to be eligible to enter. The competition, now in its third year, enjoyed more than 1.4million reaches.

Conrad Macao’s signature bear collection has been an inspired part of guest stays since the hotel opened in April 2012. In addition to the signature gold bear guests receive when they stay, an exclusive collection of four new bears is produced every year. The 2016 collection is a series of animal print bears and includes a Chinese New Year Giraffe Bear, a Snow Leopard Bear, a Pink Leopard Bear in October to support Breast Cancer awareness, and a Zebra Bear for Christmas.

“We were overwhelmed by the response to our #Travelbear campaign,” said Bede Barry, Vice President, Hotel Operations, “Our bear travelled the world, and appeared in front of iconic world landmarks in London, Paris, Australia, USA, Canada, Greece, Italy, Egypt, Korea, India and Thailand.  We knew our hotel guests were world travellers and now we know our Conrad bears are as well! We will certainly continue the campaign in 2017 to see where he visits next.”

Photos were judged by a team of hotel executives based upon their creativity, along with the number of shares and likes they received on Facebook.

Conrad Macao, Cotai Central offers the popular Conrad Concierge mobile app, which allows global luxury travellers to customise details of their hotel stay before, during and after each visit via a smartphone or tablet. Whether it’s pre-selecting bath amenities or checking-in while in transit from the airport, guests can access a variety of features using the app.

Conrad Macao Cotai Central participates in Hilton HHonors®, the only guest rewards program that allows members to earn Points & Miles® for the same stay and redeem points for free nights with No Blackout Dates at more than 4,600 hotels worldwide. Hilton HHonors members who book directly through http://www.conradhotels.com will have access to benefits including digital check-in and complimentary Wi-Fi.