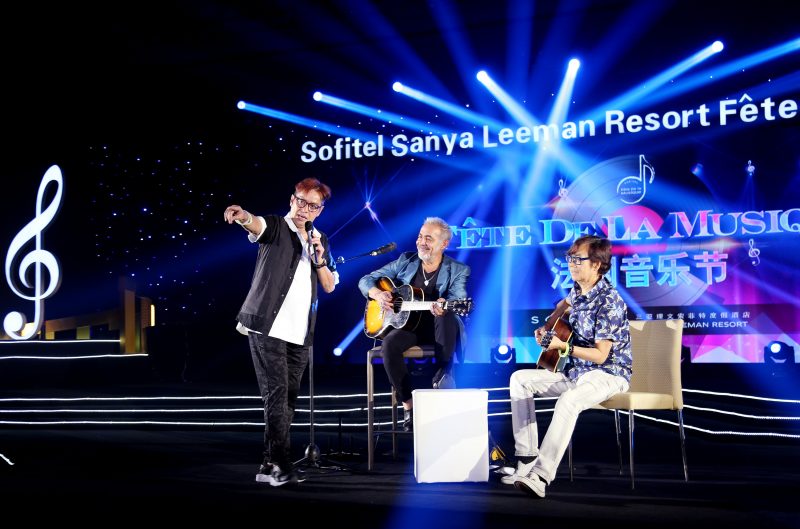 Hainan, China, July 12, 2016 /Xinwengao.com/ - Sofitel hotels have been celebrating the French Fete de la Musique since the beginning of June. This annual music event has been held during the European summer since its inauguration in 1982 and Sofitel has been celebrating the festival amongst its 120 hotels worldwide since 2010. This year’s theme for the majority of Sofitel hotels in Greater China has been “Vivre ensemble la musique” (Musical Togetherness), expressed in diverse events.

On 24 June, 300 guests enjoyed a special Fete de la Musique at Sofitel Sanya Leeman, the luxury resort that has brought the French art de vivre (art of living) to a spectacular Haitang Bay setting on the southern tip of China’s only tropical island destination.

Guests were fascinated by the star of the evening — multi-talented, Henry Padovani, in his newest show, Fly Like a Song. Co-founder of popular English rock band The Police, the legendary French performer has explored many genres of music in the course of his long career. His newest programme includes some of his most famous and best loved songs in an electrifying performance that ranges from dreamy blues to classic rock interspersed with abrasive and sometimes mischievous sounds.

Nostalgia was to the fore when surprise guest participants joined Henry Padovani on-stage for some impromptu numbers. Evergreen members of The Wynners, Hong Kong’s favourite pop band from the 1970s – Alan Tam, Bennett Pang, Anthony Chan – as well as Eddie Ng delighted the audience by showing that they had lost none of their appeal in the intervening years. The audience reached fever pitch of excitement!

The promotion of French culture is one of Sofitel’s four key pillars — Design, Culture, Gastronomy and Wellness. Sofitel hotels will continue to hold various kinds of events to promote these four pillars as an integral part of the brand.

Sofitel is the elegant answer to a luxury traveler’s quest for the good things in life. Each hotel illustrates an artful blend of local culture and French soul. With an innate sense of new French art de vivre, Sofitel hold themselves to a heightened level of excellence and refinement. 120 addresses in 40 countries across the five continents appeals to modern status seekers, who have something special and unique that makes them stand out from the crowd. Each hotel is differentiated by its “cousu-main” service, graceful design, creative and inspired gastronomy in major cities like Paris, London, New York, Rio de Janeiro, Dubai, Bangkok, Shanghai… or nestled away in a country landscape in Morocco, Egypt, Thailand, French Polynesia…

Sofitel Legend, where heritage meets modernity. The network is composed of 5 timeless and iconic addresses that are generously infused with French luxury for ultimate indulgence.

SO Sofitel, rebellious lifestyle hotels bursting with local energy. In Bangkok, Singapore and Mauritius, SO Sofitel is an experience apart from the rest, recognizable for its avant-garde design, state-of-the-art technology, surprising happenings and social experience.

MGallery by Sofitel, charming boutique hotels, inspiring and singular. The intimate collection of 75 hotels stands for adventurous explorers who are clued in to travel and seek out the unbeaten path.